This blogpost was originally written and posted on my former blog on 7/9/2015, but it feels relevant again, so I’m reposting it here.  There seems to be a renewed discussion about ignoring the least of our community, as if this is a new development brought on by a new president.  Well, I hate to be the bringer of bad news, but we have been ignoring the least of our communities for much longer than our collective outrage suggests.  If we are truly committed, as a people and as a community, to relieving the suffering of some among us, perhaps we start with food, water, and shelter.

I was in Seattle on a business trip this week and decided to wander around the downtown area to look for a place to eat dinner.  I stumbled upon Westlake park and got sidetracked when I saw some people playing ping pong on some outdoor tables next to a Foosball table and several tables of active chess matches.  Normally, one would pass right through, but something caught my eye at one particular ping pong table.

There was an intense ping pong game going on between this little boy and a homeless man.  I sat and watched them for 30 minutes and then got roped into my own game of ping pong by some tourists from Indonesia.  The 60+ year old lady schooled me.  I have a feeling she may have been a professional at one point in her life.

I left 3 hours later humbled, grateful, and full, though I had not eaten anything.

As it turns out, the City of Seattle has dropped in ping pong tables throughout the city to try and clean up their parks and rid them of the “creepy people” (their words, not mine).  It appears from the photo above that they succeeded in giving people something to do during the day, homeless or not.  Did it not occur to them that a homeless guy would enjoy a game of ping pong just as much as the next guy?

What is it about homeless people in a park that deems it unclean or unfit for the “regular” folk.  Why are we so intent on limiting any contact or exposure we might have with these people?  I wonder what the reaction would be if a homeless guy decided to park himself on a sidewalk in my neighborhood?  How long before the police were called and asked to move him to another part of town or to another town altogether?  We like to think of ourselves as lovely people when we give a buck or two to the guy standing at the end of the off ramp to a freeway.  “Hey, I’m doing my part to end homelessness in my community!”

Perhaps you’ve seen these around your town.

Armrests?  Nope.  They are there to prevent people from sleeping on the bench. 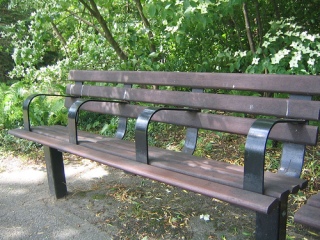 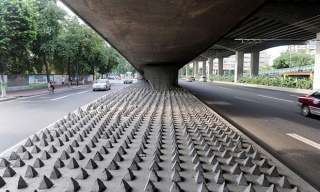 Our disdain for the least among us is not subtle at all.  Perhaps change will occur when we realize that homelessness isn’t a disease we can catch, but actual human beings that need a roof over their heads, food in their stomachs and a way to succeed as members of a community.

Maybe they just want someone to play ping pong with.

The little boy in the picture above taught me a lesson this week.  It’s the same lesson that Jesus teaches.

When the Son of man comes again, this time in all His glory, there will be a judgment.  It’s not a judgment on how Republican or Democrat we are, or how we reacted or stood up for or against a particular social issue.  We are not going to be asked for our financial statements to determine how successful we have been, or how many things we have acquired.  It couldn’t be laid out any more clearly than in Matthew 25.

31 ¶When the Son of man shall come in his glory, and all the holy angels with him, then shall he sit upon the throne of his glory:

32 And before him shall be gathered all nations: and he shall separate them one from another, as a shepherd divideth his sheep from the goats:

33 And he shall set the sheep on his right hand, but the goats on the left.

34 Then shall the King say unto them on his right hand, Come, ye blessed of my Father, inherit the kingdom prepared for you from the foundation of the world:

37 Then shall the righteous answer him, saying, Lord, when saw we thee an hungred, and fed thee? or thirsty, and gave thee drink?

38 When saw we thee a stranger, and took thee in? or naked, and clothed thee?

39 Or when saw we thee sick, or in prison, and came unto thee?

41 Then shall he say also unto them on the left hand, Depart from me, ye cursed, into everlasting fire, prepared for the devil and his angels:

43 I was a stranger, and ye took me not in: naked, and ye clothed me not: sick, and in prison, and ye visited me not.

44 Then shall they also answer him, saying, Lord, when saw we thee an hungred, or athirst, or a stranger, or naked, or sick, or in prison, and did not minister unto thee?

46 And these shall go away into everlasting punishment: but the righteous into life eternal.

Since relocating our family to a small town in northern Idaho, Tracy and I have often pondered why people are so friendly. I was recently convinced it’s because they spend the entirety of their winters digging each other out when their cars get stuck in the snow.   Sacrifice changes people. 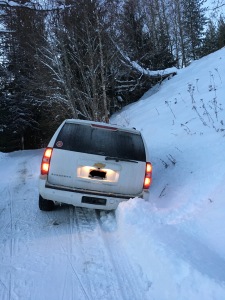 Life seems complicated sometimes, but I think a simple way to approach life is to be able to look back and not have a slew of victims in my wake; people I have wronged, people I have failed to care for; people I have judged, people who I have ignored. To leave this life without any accusers would be a great way to go out. This is the primary message we have recorded from Jesus to us. The Ten Commandments, focusing primarily on not creating victims, are fairly limited in scope. Jesus clarified when he summarized everything into the two great commandments; just love God and love your neighbors. It was important to be a good person before Jesus was born and showed us how. He was opposed by those that just couldn’t understand why he acted and spoke contrary to their traditions. The organized religion at the time, with a line of authority reckoning back to Moses, charged him with blasphemy for following the two great commandments.

The charges and condemnations levied against us latter-day gentiles, as prophesied in the Book of Mormon (see 2 Nephi 28 and Mormon 8), can be traced back to our behavior that creates victims in some way.

Each of these charges has a victim involved.  Each charge only occurs by the action or inaction of another (in the case of ignoring the hungry, inaction is still an action against that person).  You cannot lie or steal or murder or hate without creating a victim.  Makes you wonder about applying the word “sin” to behaviors that do no harm. If a person is alone in the forest and profanes and no one is around to be hear it, is it wrong?

What are those principles that each of us follow, which shape our behavior in a given situation?  Do we self-preserve?  Are we focused on asserting dominance?  Are we easy-going?  Do we want to appear intelligent or funny?  Are we interested in seeing the world be met with justice or with mercy?  Do we want to serve and love and sacrifice?  I’m not quite sure how to identify your guiding principles.  Perhaps look at what your default reaction is when presented with choices; which reaction comes up most often.  It may take some self-reflection, some honesty, and some time.  I think self-awareness is a valuable thing to work towards.

Here’s an example.  If I’m hungry and I have a sandwich, but someone approaches me who is also hungry and asks for a some money for food, how should I approach that situation?  It’s not a trick question, but sometimes we treat it like one.   I promise you that 2 different people can approach this scenario from antithetical points of view, and both will consider themselves righteous while condemning the other. One will call the other selfish and the other will accuse of contributing to a potential drug or alcohol habit.  What is the right answer to this situation?  Is there a right answer?  There is if we are to believe the words of Jesus as contained in the scriptures.

“Give to him that asketh thee, and from him that would borrow of thee turn not thou away.”

While boarding a plane from Anchorage  this morning, I witnessed 2 things that prompted this writing.

First, I sat down in my aisle seat and a couple minutes later a young man/woman couple approached and indicated they would occupy the middle and window seat next to me. Initially, the woman offered the window seat and told her partner that he would have more arm room. He was tall, fit, and had broad shoulders. He said he would be fine  and told her to take the window seat. She asked again and he insisted again, so for the 3+ hour flight, he chose to sit next to me (not a small dude) and studied up for a firefighter exam, while she slept seemingly comfortably, resting against the inside of the plane. I spent the flight leaning a little extra into the aisle to reward this guy for his selflessness.

Now on to a contrasting example. A woman and her son were seated across the aisle from me. Her approximately 8 year old son had the window seat and she sat in the middle.  When the flight was nearly filled, a flight attendant  approached the mother and asked if she would be willing to move 15 rows up further in the plane and occupy a different set of window and middle seats.  The flight attendant was looking to relocate a couple with a baby in a car seat and I guess this aisle seat was the only aisle seat open on the plane. The woman claimed that her son had a friend with a family sitting in the window seat in the row behind them and she didn’t want to separate the friends.  During the entire flight, the friends spent their time playing games in their individual iPads and, to my observation, did not interact once, except for the few minutes at the end while we were deplaning.  In one of these scenarios, love and selflessness were shown; in the other, a victim was potentially created. Sacrifice is at the very heart of love. 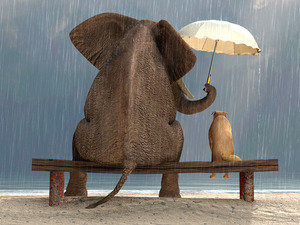 Occasionally I succeed and occasionally I fail.  I have enough victims lying in my wake that I ought not be concerned about the behavior of others, but I do have a stake in the society I was thrust into and regularly partake of.  Can you imagine a place where no one accuses and everyone forgives?  Where love and selflessness are the guiding principles upon which all behavior is based?  Where sacrifice is the default?  Where forgiveness rules the land?  Where NO ONE passes a car stuck in snow on the side of the road regardless of what item in our schedule we could use to justify not slowing down?  That sounds wonderful, doesn’t it?

*Think we know what the word “abominations” means?  We should take a closer look, because I don’t think it means what we think it does.  Sodom and Gomorrah were destroyed because of their abominations.  We should be sure we understand why that happened.

To the study of coming to Christ